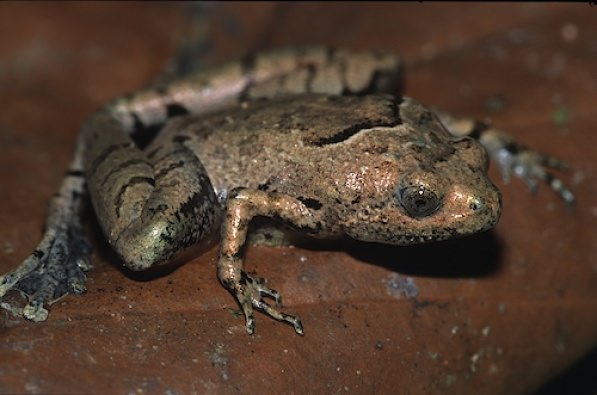 Microhyla berdmorei is a small frog (ca. 30 mm) of the forest floor. For its size, it has long legs and can make impressive jumps.

The coloration is made up by shades of brown. Note the conspicuous markings across the shoulder and bewteen the eyes. Fingers bear small adhesive disks, more expanded ones are on the toe tips.

This species has been reported to inhabit mostly lowland primary and secondary rainforests. But the specimen on the photo was found almost 1.000 m asl near Bario. We have never found a site where this species was abundant. Maybe adults are very secretive and come out from their hidings under certain conditions.

Details of its reproductive biology and larvae have been described by Leong (2004) for Peninsula Malaysia populations:

It reproduces in temporary stagnant pools. Tadpoles are mid water column suspension feeders. They lack keratinized mouthparts. The spiracle is medially positioned on the belly. Tadpoles are delicately build and reach a maximum total length of 23 mm.